Buy A Copy
About The Author

In 2011 Katina Daanen paddled the Northern Forest Canoe Trail in 53 days. Her trip was unusual in that she coordinated six different people to paddle with her, most of whom were from Wisconsin. With the exception of her daughter, her paddling partners were each over 50 and with the exception of her husband, everyone was female.

While she planned her trip using the NFCT guidebook, maps and website, she found many of the paddler blogs to be helpful from a Through-Paddler's point of view. Her own trip was documented with the intent of providing more details and adding to the volume of information available. After hearing similar trail questions being raised and noticing travel patterns among Through-Paddlers, she recognized a need to create a Through-Paddler specific resource. Drawing upon her research, organizational and design skills, she is creating a comprehensive guidebook that describes the entire trail from its western to eastern terminuses. She also likes drawing maps.

Katina's love of water and the outdoors was nurtured as a child. She learned to swim in Shell Lake. Summers were spent creating moss fairy houses under cedar trees along the shores of Ada Lake in Northern Wisconsin where her family liked to camp.

Her first backpack trip was to the Gallatin mountain range in Wyoming, followed by 60 mile Wisconsin sections of the North Country and Ice Age Trails and Northern Michigan's Pictured Rocks Trail-all before she was 18. Inspired by Anne LaBastille's books, she hiked a section of the Northville-Placid trail in upstate New York at 19. For her 20th birthday, she hiked 60 miles of the Georgia section of the Appalachian Trail. Canoeing became the easier way to explore the outdoors once married and with two children. As a family she has paddled the Buffalo River in Arkansas, the Jacks Forks River in Missouri and the Namekagon, St. Croix, Peshtigo and Oconto Rivers in Wisconsin in addition to numerous trips to Michigan's Sylvania Wilderness, and 14 trips to the Boundary Waters Canoe Area Wilderness (BWCAW) and Quetico Provincial Park in Canada.

Katina Daanen is an art director and web designer with more than 20 years of experience working in the advertising industry. In 2006, she established her own freelance business. When not working, paddling or traveling, Katina spends her free time in the northern Wisconsin log cabin and cordwood sauna that she built with her husband. 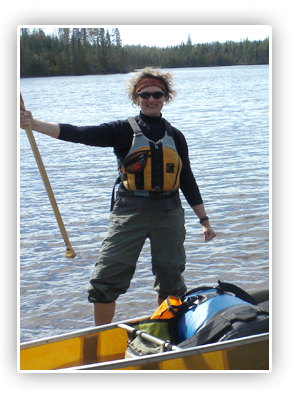 The information contained within this publication is the result of the best efforts of the author using information obtained from personal experience, interviews, paddler blogs, trail data and facts available at the time of publication. Changes in environment and economics are constantly occurring and therefore, information cannot be guaranteed to be precisely accurate. This book is not a substitute for outdoor skills or good personal judgment. Any outdoor recreational activity is potentially hazardous. Each user of the information presented on this website or in this book must accept personal responsibility for his or her own safety and orientation. Always wear a pfd.

All rights reserved. No portions of the content of this website or the guidebook may be reproduced without the express written consent of the author or publisher. Illustrations and photography remain the rights of Katina Daanen or any other credited contributors.